You can download rights resources from this site in several different languages.

The full UN Convention on the Rights of the Child

As a Convention ratified by almost every country in the world, the full UN Convention on the Rights of the Child has been translated into several different languages. We’ve translated it into Scots Gaelic.

Read the full text of the UNCRC in Scots Gaelic.

The Children and Young People’s Commissioner is a member of Happy to Translate, which means we’re both able and willing to speak to you in languages other than English.

Find out more about Happy to Translate on their website.

The simplified UNCRC on our site is available to download in different languages.

Our 7 Golden Rules are available to download in several languages. 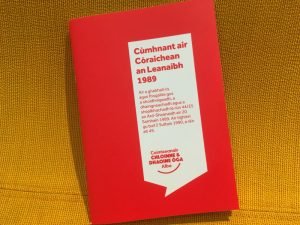 A pocketbook in Scots Gaelic containing the full text of the UNCRC. Order Gaelic UNCRC Pocketbook to be delivered

A simplified version of the first 42 articles of the UNCRC in Scots Gaelic.

Scots Gaelic translation of our UNCRC Symbols poster, which explains the first 42 articles of the UNCRC using pictures and simple language.

April 2015A simplified BSL version of the first 42 articles of the UNCRC. View BSL for BSL Simple UNCRC 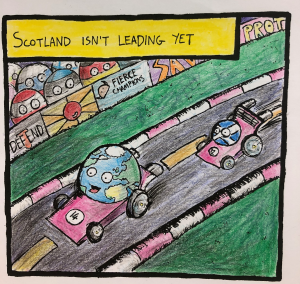 Each year, we produce a version of our annual report for children and young people. They’ve told us they want to see bright pictures about our work and have us explain what we’ve done. View BSL for BSL Children and Young People’s Annual Report for 2019/20 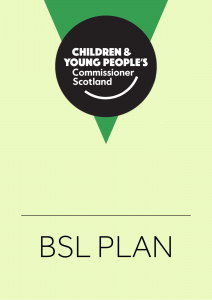 Our BSL plan for 2018-2024 allows us to focus specifically on a group of children and young people whose rights are more at risk, or whose views are not always taken into account. View BSL for BSL Plan

Promises made in our BSL plan. View BSL for Our BSL plan promises