Help for children Help for young people Coronavirus
CYPCS > News and Stories > News > All children have the right to a view: Our Briefing to MSPs on the Children (Scotland) Bill
Help | Leave this site quickly
Posted on 27/05/2020 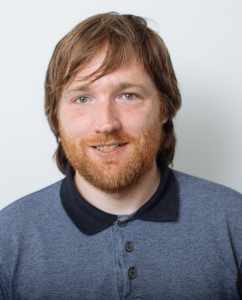 Robert is responsible for this website and other digital communications, including our office's social media accounts.

Other posts by Robert
Learning at home with the Commissioner: Activity 3 Commissioner sits on Independent Advisory Group on Police Scotland’s use of emergency coronavirus powers

We’ve sent a briefing to MSPs ahead of Stage 1 debate on the Children (Scotland) Bill in the Scottish Parliament this afternoon, which draws on a longer written briefing we recently sent to the Justice Committee.

We support the general principles of this Bill, but want it to be strengthened to make it clear all children can have their views heard. 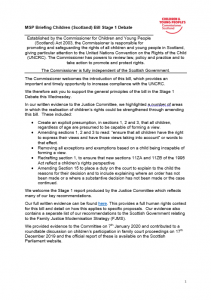 Our short briefing ahead of Stage 1 debate on this Bill.

Read a mobile-friendly version of the briefing.

Evidence around this proposed Bill.

Q:
How does a Bill laid before the Scottish Parliament become a law?
A:

Bills are proposed laws that are being examined by the Scottish Parliament.

Members of the Scottish Parliament (MSPs) discuss them to decide if they should become law.

The Scottish Parliament’s website has a clear explanation of how different kinds of Bill may become part of Scots law.

What could be improved in this Bill?

The United Nations Convention on the Rights of the Child (UNCRC) makes it clear that all children have the right to have their views heard in matters that involve them. That includes judicial and administrative proceedings.

Q:
What are judicial and administrative proceedings?
A:

Judicial and administrative proceedings are two different ways in which legal decisions are made.

Judicial proceedings are legal processes where a judge makes a decision around what should happen. Court cases are a form of judicial proceeding, and so are tribunals like children’s hearings.

Administrative proceedings are legal processes that don’t involve a judge. Usually, they’re carried out by a government body.

The Bill removes a presumption currently in Scots law that children aged 12 or over can express their views.  This is good, because we’ve heard that this is sometimes used to prevent those under 12 from participating in decision making.

But we think the Bill should make it clear that all children have the right to express their views. This would make it more compatible with the promises Scotland’s made under the UNCRC.

The Scottish Parliament’s Justice Committee has recognised this. It’s called for the Bill to be amended at Stage 2 so it presumes all children have the right to have their views heard, no matter their age, in line with their evolving capacities.

Q:
What are evolving capacities?
A:

As children grow older, they become more able to understand their lives and make decisions that affect them. This happens gradually, and it doesn’t happen at the same speed for everyone— it depends on things like a child’s experiences, education and maturity.

A child’s ability – or capacity – to make a reasoned decision will depend on the decision being made.

Evolving capacities is a term used to refer to the increasing ability to make reasoned decisions in different parts of a child’s life.

What does the UNCRC say about evolving capacities?

Article 5 of the UNCRC says that the direction and guidance parents give their children should reflect the evolving capacities of each child. When a child is younger, they will need more protection, as they may be more likely to make choices without considering or understanding the consequences. But as a child gets older, this will slowly become less true.

Evolving capacities are also important to Article 12 of the UNCRC.

All children have the right to have their view heard and for it to be taken seriously. But the weight their view is given is dependent on their evolving capacities― the extent to which they can understand the issue and the possible outcomes of a decision.

The concept of evolving capacities should never be used to dismiss a child’s view. The child’s view needs to be taken seriously whenever it’s heard as it can change what an adult considers to be in a child’s best interests, by giving them a better idea of what’s important to the child and what they consider distressing. 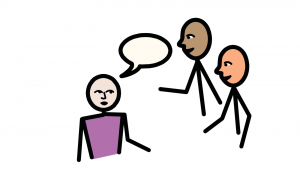 I have the right to be listened to and taken seriously