Children’s and Young People’s Commissioner Bruce Adamson has written to the SQA and Scottish Government calling on them to make sure all young people are treated fairly and get the results they deserve.

He’s demanded that Cabinet Secretary for Education John Swinney MSP use his powers to direct the SQA if necessary to achieve a just outcome for all young people.

His call comes ahead of the SQA’s appearance before the Scottish Parliament’s Education and Skills Committee on Wednesday 12 August.

Our office has warned the SQA around their approach

From early on, our office has warned the SQA and the Government of:

“It is young people who are the most affected by this system, and they should always have been a part of determining how the SQA approached this year’s results.”

“We’ve seen from the powerful work of the SQA Where’s Our Say campaign, and the young protesters in Glasgow, that young people have a great deal of value to contribute to these discussions.”

“The SQA’s refusal to discuss its proposed methodology in advance has resulted in conversations that could and should have taken place three or four months ago now having to happen at even greater pace, and against a backdrop of many children and young people experiencing significant anxiety and distress, not to mention the practical implications of missing out on university or college placements.”

What do the letters to SQA and Government say? 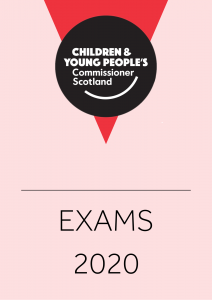 August 2020. Our letter to Deputy First Minister John Swinney MSP calls on him to confirm changes will be made so that the appeals process around exams becomes directly accessible to young people and centered on their individual attainment.

Read a mobile-friendly version of the letter.

August 2020. Our letter to the SQA calls on the organisation to make sure their appeals process is directly accessible to young people and centered on their attainment as individuals.

Read a mobile-friendly version of the letter.

In the letters, which have been copied to the Scottish Parliament’s Education and Skills Committee ahead of its session with the SQA on Wednesday, the Commissioner’s office calls on the Government and SQA to apologise to the young people affected and:

Make sure the appeals process is accessible

The appeals process must be directly accessible to young people where a school has declined to submit an appeal, and where a young person disagrees with the grade their school has estimated. Appropriate timescales and supports must be provided.

The appeals process must be able to take account of the widest possible evidence, including course work and assessment portfolios already submitted to SQA or schools.

Confirm appeals will be based solely on evidence provided

Appeals should be determined only on evidence presented as part of the process.

Further statistical modelling or moderation shouldn’t be part of determining their outcome.

Confirm the SQA will have the resources it needs

Scottish Government must provide all necessary resources to the SQA, so that it’s able to manage the anticipated high volume of appeals in a quick, fair and robust way.

Confirm the SQA will adopt a “no detriment” policy

The SQA must adopt a no detriment policy similar to those put in place by universities and colleges.

If the appeals process results in significantly higher pass marks compared to previous years, no further adjustment should be made to grades to bring them in line with historic statistics.

“This situation has placed process before people”

Nick Hobbs, Head of Advice and Investigations for the Commissioner said:

“This situation has placed process before people, and in endeavouring to protect the system has delivered results to individual students that are simply unfair.”

“It appears that too many young people have not received the results they deserve and they are due an apology as well as redress.”

“Children from more deprived areas report being downgraded, not based on an assessment of their own abilities and potential but on the historic performance of the school they attend.”

“The unfairness of this approach is obvious and it should make the government scrutinise in much more detail the way in which we assess young people’s performance and potential.”

“However, the urgent need now is to ensure that those young people whose grades do not reflect their ability are able to have that situation reversed and are able to take up the opportunities they deserve.”