A group of young people is demanding greater recognition of human rights in Scotland by calling on adults to make sure children can stand up and challenge decision-makers when they don’t keep their human rights promises.

The Young Human Rights Defenders Action Group made eight recommendations to those in power in  Promote. Protect. Defend , a report released by our office and laid before the Scottish Parliament.

The Action Group has worked with our office over the past year. Each of them brings their own expertise on the issues that matter to them— such as the rights of young carers, gender equality, care experienced young people, music tuition, the environment and Gypsy/Traveller communities.

Their work links with calls from the United Nations for states to do more to support young human rights defenders and this week they took their recommendations to Holyrood.

Their report contains recommendations for the Scottish Government, Scottish Parliament, and Scotland’s main public bodies on how they can and should support young human rights defenders in Scotland.

There are eight recommendations in total, which you can read about here.

Speaking about the experience over the past year, young human rights defender Noah said:

“I get to speak out and defend my rights and everyone else’s around me. It’s teaching from a young age that it’s important to stand up and support others and support yourself as well by protecting all these rights.”

Charlotte who campaigns for the rights of young Gypsy/Traveller added:

“It makes me feel part of something bigger … fighting for a bigger future and a better life for everyone. Adults should help give young defenders a voice and a platform to speak for what they believe in.”

“Really hand over control to young people and let them be the ones who direct the projects, who direct the funding, who organise events, who run the meetings and who chair the panels. If you want young people to be making change you need to not just be facilitating that change you need to make sure that they are the ones who are leading the way forward.”

“Being a human rights defender is more than just knowing about your rights and exercising them – it requires action. Challenging those in power is always difficult and children face an additional political and economic power imbalance with adults. Yet, despite these extra challenges we see children all over Scotland using passion and creativity to promote and protect human rights. I’m proud to have worked alongside our Action Group as they courageously stand up to defend their human rights and the rights of other children and young people.

“People in power have made a promise to children human rights defenders and must support them in their important role. In this 30th anniversary year of the United Nations Convention on the Rights of the Child, the Government must commit protecting children’s human rights in Scots law. It’s not children and young people’s responsibility to ensure human rights are respected, protected and fulfilled; that’s the responsibility of the state.”

What is a human rights defender?

Human Rights Defender is a term used to describe people who, individually or with others, act to promote or protect human rights.

The role is protected within  the UN Declaration on Human Rights Defenders and references rights in the Universal Declaration of Human Rights, many of which are reaffirmed in the UN Convention on the Rights of the Child (UNCRC). 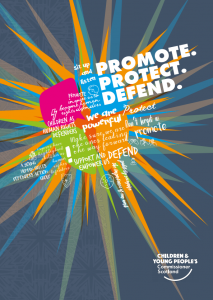