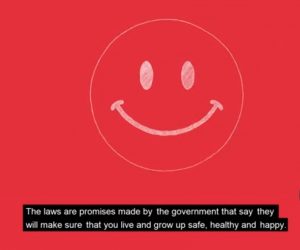 October 2017. This film for children and young people covers what our office did between April 2016 and March 2017. It’s subtitled and signed in BSL.

Thanks to our film’s narrators, Coll McCail, Hannah Stewart, Mia Harper and Sol Mclennan. Thanks also to presenter Amy Dawson.

Deaf Action provided the BSL translation and subtitles for this film, and it was produced by Media Education.